I thought about this the other day while listening to the RWTD podcast .... Anyone remember seeing the Van Halen Warner Brothers release that was a twin pack cassette package with WACF/Faiar Warning on 1 cassette tape?  WACF side 1 and Fair Warning side 2.   It's like they wanted to bolster sales of the album or something.  I wonder how that counted towards RIAA numbers?  Anyway, that was an interesting way to market both albums.  I never bought it because I wanted the separate cassettes for my collection back in the day before CD's and remasters etc.

I had this one, yes. I also had the ULTRA rare Van Halen 1/Van Halen 2 combo cassette as well. These " Two For One " cassettes were sold throughout the Air Bases I lived at ( when my dad was in the Air Force ), especially when cassette players could switch sides without physically removing the tapes from the holder.

I never saw that! I would have made the same choice and bought them separately. 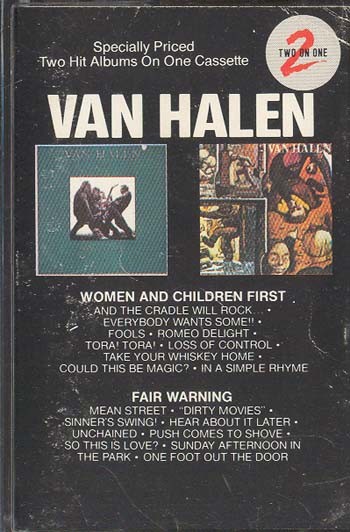 Here’s an image of the tape I found online.   Just interesting marketing for these two “lower selling” albums.

used a modern condenser mic to record them, so the deck noises are standard/high quality recordings.  vidmate app