A year without oxygen

A year without oxygen

One year ago tomorrow I saw the last live music show of the past year - Dweezil Zappa and the Hot Rats Orchestra at the Music Hall in Tarrytown. Before sound check, I had a conversation with Dweezil in which he indicated that they would be hearing soon if the tour could continue but it didn’t seem likely. Ryan Brown (drummer) was so concerned about what this would portend for the band members , their families, and musicians in general. His worry was palpable. Sound check went on (here is Peaches En Regalia - sound check quality). But it was clear that there was a pall over the stage. Shortly before the show started, word came down that the tour was canceled and there would be no further live events of any sort after this show. Dweezil, Scheila, Ryan and tech Chris would take the tour bus home on a three day journey. Back to LA. The rest of the band and crew would return to their homes the next day. As the lights came down, and the first drum flourish of Peaches was heard, it became clear that this was going to be one high energy show. As Dweezil later said, that if this was going to be the last show for awhile, we would get all the energy the band had to offer — and we did.
As an avid fan of live culture: rock and jazz, classical, opera, dance, theatre, museums... the past year has seemed as if someone turned off the oxygen -as Covid was want to do with people that we loved and lost. Perhaps we can see hope around the corner, as more and more get the vaccine and an end to this might not be in sight, but at least it is conceivable. I can’t wait until the essential workers of culture are back at work. Live music and art must resume soon. Then as Covid fades, the physical oxygen and the spiritual/cultural oxygen returns, life will feel more normal and vital. May the “imaginary guitar notes” as described by Frank Zappa in his prescient dystopian opus “Joe’s Garage” be replaced soon with the energizing excitement of living art. Then, life will fully return. May it happen speedily and soon.

Nice one Gary. It's been a crazy year. Hopefully, we will be able to play live again in 2022. There are still too many unknowns about the return of touring to make definitive plans for this year. Best, DZ

Unfortunately, I am a "late waking" guy (not literally - waking up sometime between 4:50-5:20 am). I have enjoyed your Dad's music for a long time, but did not realize that you have been honestly and very respectfully and also very professionally continuing to keep this tradition. Thank you for this commitment. You really give joy to those who admire this artistic realm. I also had to realize that you once played in Hungary... and I completely missed not only the live music, but also the news about it. (As far as I know, either Budapest or Prague was the place where Frank played for the last time in public. In Budapest, he had very talented Gipsy musicians from the top category to play with, celebrating the farewell to Russian troops). I was trying to catch-up, and saw your schedule - there were just 2 items on it, but one was very close to the borders, so without knowing whether borders will be open or not, I bought my ticket to Eisenstadt, ... but saw this disappearing from the events... I do understand. Everything is unpredictable nowadays. Is this 100% cancelled? The event site still lists you, and of course Deep Purple is also worth listening to, but they will certainly play the same show I have listened to a number of times without a modified note, with the same track listing... etc, and the attractive part on the program is just Dweezil Zappa plays Frank Zappa. I am very much looking forward to listening to you live somewhere, You and the prime musicians you play with, because they are good... so such plans postpouned to 2022?

It is not easy to find the proper words on a foreign language, but what you do is very genuine and authentic! And I like the 2h30min shows with no disturbing video background, which are only for distracting the audience' attention and constricting the musicians to play with tight timing, not leaving place to improvise longer than the constraint allows...

This has been too long for a first step... A brief answer to the question on cancelling will suffice... 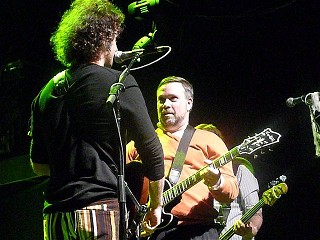