Since Edward Van Halen's passing, I've been in a reflective mood. It's fascinating to think that one simple step leads to a journey that brings inspiration at every turn.

The photo attached to this story is not a directly related Zappa story. But, it started me down the path I am now on.

On November 17, 1988, my mother took me and my brother to see Van Halen, my very first concert ( I've uploaded this pic to my photo folder. It was taken during the band's start to " Best Of Both Worlds " ). I was already a fan from the 1984 and 5150 albums, at that time. But being a young teen, I was still too young to attend concerts, until I turned 18. I could play guitar and was in the school band. But, I could never find people wanting to play guitar together. Eventually, I became a " bedroom " guitar player. This was a challenge as music is a sharing opportunity for others. I eventually felt that maybe I should give up. That all changed after this November night. Having witnessed Edward up close showed me the power of music while playing with others. To this day, I think about that show and I now consider it to be the greatest concert I ever went to ( I now own an MP3 bootleg of the show and it's as good as I remember it ).

Listening to music has many benefits: From happiness to aggression, music has many ways to liberate what we go through in life. But to actually see a master musician like Edward administer his skills in a live concert setting ( with a top notch band ) helped me understand WHY and HOW music can impart its magic from fingers to hearts. Seeing how music brings people ALIVE was a communication skill that I had to learn. So, as a result of this show, I learned to play with others ( both beginners and some pros ) as well as focusing on improvements in communicating through the music to other band members.

As a result of joining others in bands and solo acts, I learned from others on their influences. Shortly after 1989, I started to improve my own guitar skills. But I knew there was more than VH. So, one friend introduced me to a tape called " Sheik Yerbouti, " claiming that this tape " would introduce me to an even bigger world. " Since these events, I've had the honor and privilege of seeing hundreds of other musicians in concerts as well as been given opportunities for lessons, from Dweezil himself to Joe Satriani. Playing the guitar has been a never ending learning experience. I'm incredibly honored to play this instrument.

Playing guitar has brought me wonderful experiences. And, while I am not a professional musician, if I had not seen Van Halen, chances are I probably would have given up playing music.

RIP Edward. Thanks for showing me ( and millions of others ) the power of musical communication.

Thanks for sharing that story David. Music has mysterious powers that connect all of us in different ways. If you want to think about it on a deeper level, imagine that we are all being bombarded with frequencies which create invisible shapes and patterns that we walk through daily. Like walking through spider webs. Sometimes the frequencies feel good and inspire us and at their very best maybe even stimulate things that need healing in our bodies and minds. For a visual reference have a look at this : https://youtu.be/tFAcYruShow. I find the shapes to be fascinating and there are so many more videos to be found on this research that do a deep dive on the frequencies that are the best for you. The patterns generated by sound are visually surprising. It's crazy to imagine walking through those patterns every day of our lives and not being able to see them.

Agreed. I do feel your father's very ideas on how frequencies setting off certain emotions/vibrations to be an important field for further study ( I'm hearing there are now some studies going on about how certain people " see " colors when listening to music--https://synesthesia.com/blog/sound-synesthesia/ ). Amazing stuff to think about. Thanks again! 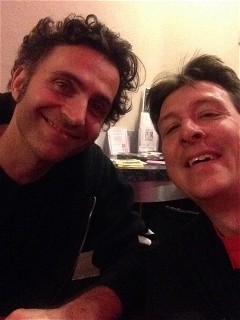