I got me a console!

In this ridiculous, never-ending saga that is my attempt to build a recording studio, here is a recent highlight: 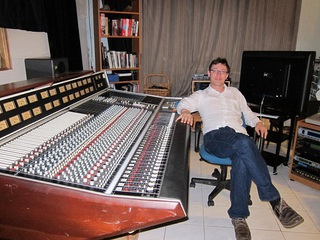 A local studio was downsizing and we picked up this glorious piece of audio history very cheaply ($8500). It is an Auditronics 740 console, made in Memphis in 1982. It was the primary console for a major studio in Australia during the 80's and many classic Australian songs were recorded on it - Americans might be familiar with "Under the Milky Way" - http://www.youtube.com/watch?v=V-mQyRuHIuA

It needs a little "loving" but we are working on that. There are some minor electronic issues, as well as the obvious scuffs and dings in the woodwork.

Getting it into our studio was a "keystone kops" affair - it took six people just to get it through the door. It also doesn't yet work as we don't have the right connectors to hook it up to Pro Tools (and getting 50 new TRS plugs in the Christmas week is basically impossible.) So it is a ridiculously elaborate CD player at the moment.

The console and some more new toys are on display here:

Back when this all started we naively thought we'd be open by May 2011. We are now hoping to open in March 2012.

This is a mind-blowing article that you post here. I am happy to be on your website. Thanks for a talk about this dazzling article with us.

It is actually a great and helpful piece of information. I’m glad that you just shared this useful info with us. Please stay us informed like this. Thanks for sharing.

Call girl udaipur is famous for top class udaipur escorts near you. They are highly professional and very caring. So you need not to worry about any thing. Our night girls are very beautiful and attractive and you will be satisfied to hire them. so to book Independent call girl in udaipur contact us.

This is an impressive stimulating article. Jaipur Escorts all around that truly matters content with your splendid work. You put incredibly particularly fulfilling information. Keep it up. Keep blogging. Hoping to evaluate your next post.

The prominent site with by a wide margin the vast majority of the substance coming clean. It moved me the whole other same much like me and express their contemplation's in such a stunning substance.

I've been trying to think of ways to teach my girls how to sew and am thrilled to see this. Hyderabad Escorts  I've got so much cute materials that I want to use for something and I think I now know what to use it for. I feel it interesting, your post gave me a new perspective!