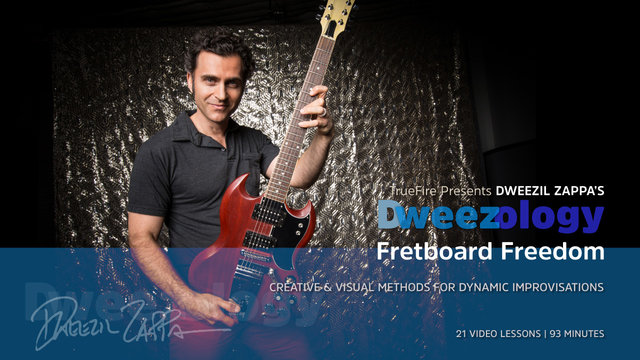 The pentatonic box is the guitarist’s proverbial “blessing and curse.” For guitar players, the initial discovery of the box parallels Edison’s eureka moment with the light bulb. The visual mapping of the pentatonic box on the fretboard is as easy to follow as painting with numbers. Beautifully symmetrical and quickly transposable to any key, the box single handedly catapults the vast majority of players into ‘lead’ guitarists.

But the box soon becomes a prison, a bad habit that restricts players from venturing outside, which in turn makes the rest of the fretboard a scary no man’s land of uncharted territory. ‘Breaking out’ of the box is a rite of passage that every player must take on at some point in their development, if only to quell the boredom, let alone becoming a skilled improvisor.

There are dozens of effective approaches and systems for breaking out of the box, but none of them as simple and quick to master as the approach found in Dweezil Zappa’s Fretboard Freedom. Better yet, Dweezil’s Five Shapes of Freedom serve double-duty as highly creative building blocks for fresh lines and improvisations.

We’re thrilled to welcome Dweezil to the TrueFire family. Dweezil is a prolific and extraordinarily inventive composer, recording artist and performer. He’s highly respected by his peers, fans and friends alike. Dweezil is also a passionate educator and we consider ourselves very fortunate to collaborate with him and bring his insightful teachings to our student body.

Dweezil organized Fretboard Freedom into two mind-blowing sections. In the first section, he presents the fundamentals of his Five Shapes of Freedom system in just four video lessons. He’ll show you the five shapes, their ‘mirror image patterns’ and their ‘neighbors’ to the right and left.

Get a grip on this simple system and you will not only break out of the box, you will see, understand and be able to navigate the fretboard like never before. Everything you already know about pentatonics -- all of your licks and favorite moves -- you'll be able to play anywhere on the neck, in any octave, in any key. And you’ll be able to do it in a matter of days.

Dweezil demonstrates and clearly explains everything step-by-step, concept-by-concept. The Five Shapes of Freedom are also clearly illustrated in a series of charts. All of the key demonstrations are also tabbed and notated.

Ready to begin your own rite of passage? The first step out of the box is just a click away…