SGs are my favorite guitars

SGs are my favorite guitars

SGs are my favorite guitars. Thanks for the information, I will try to figure it out for more. Keep sharing such informative posts and keep suggesting such posts.

A very awesome blog post. We are really grateful for your blog post. You will find a lot of approaches after visiting your post. I was exactly searching for.Thanks for such post and please keep it up. esta wes... you guys... you evil tempters and temptresses. I used to to have a '61 Les Paul that I had to sell for some family crisis decades ago.  At least it went to a friend of a friend up in Santa Fe who collects them.  But you guys are right about the playability, also it's really light weight and hangs really well when you must wear it.  You guys...now I'm wanting to get another one...real bad...a burning desire...

Hi everyone, I noticed that in the famous movie The Blues Brothers, Matt Murphy, guitar player of the band, plays on a Gibson SG with a white head stock, just like the Roxy ... Did you noticed this too ? I believed that the Roxy was the only Gibson with a white/cream head stock, so I'm surprised ....

My dad had an old SG and when I was about 12-13 he showed me how to sand it down and repaint it, and it came out awesome, ended up selling it for a few hundred bucks and bought my first Marshall amp with the money.

I just got a sg '61 standard yesterday. Love it but wish i could of gotten a roxy version. Maybe i can find one in time. But as much fun as i have making it go deedoodeedoodeedoodee would love to get lessons from you Mr. ZAPPA!!!

I've started playing SG's in my later years as a player. I've always liked them but never got around to buying one until 6 years ago. Now I have three.

One a side note. Is JAM Pedals going to release your version of the Big Chill Tremolo pedal? That sound was insane and I want it so bad..  I did try one with the M-Audio EX-P expression pedal that you used in the Rig Rundown with Premier Guitar in 2013. Mine was not mismatched and just worked as an normal expression pedal, which was a bummer. In that video you mentioned it may be a signature pedal for you in the future. So is it in the pipeline? Thanks!

I love SGs, and have you to thank for really turning me on to them.

I own three of them - the Roxy one (thanks to you!), a '61 RI Les Paul SG that has some pick up wizardry (Jimmy Page wiring with phase and series/parallel), and one you've seen DZ that is single coils. I've pulled the lipsticks out thought and put in Strat pickups.

The necks are the best on SGs, My hands don't get tired ever playing them. I dial all my Fractal AustinBuddy Tonepack humbucker sounds on the Roxy SG! 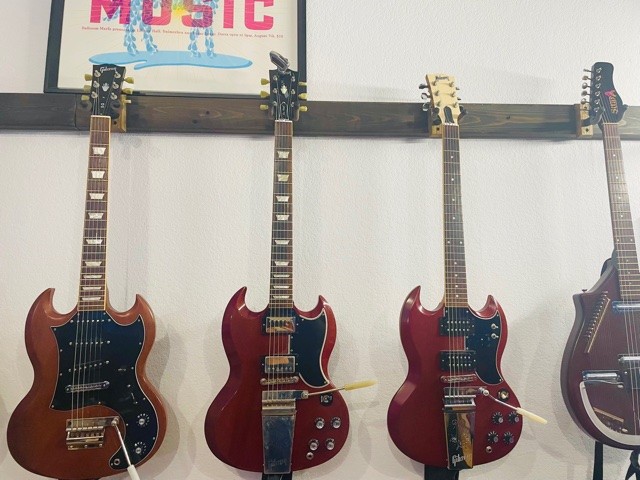 Hi Dweezil, during your last french tour, I noticed you don't use your Roxy anymore, but another SG (and your Goldtop much more ). Is it a question of sound or do you consider other necks more confortable than Roxy's ? Anyway, you sound so good, whatever your guitar ...

a special tribute to your band, without which it won't be so good, certainly !!

Thanks for the information. It is really useful for us.

Your dad's SG tone on the New York, 1976 shows is my favorite. That box set is incredible!